This week we start with a Dublin session which is attracting all sorts of young people: the cleverly named The Night Before Larry Got Stretched.  We contacted the founders to find out more about their scene.

Q: Why did you choose such a unique name for the session?

A: The name for the session comes from a song of the same name. It is an Irish execution ballad estimated to have been written around 1816. Listed in Colm O’Lochlainn’s Dublin Street Ballads and Frank Harte Songs of Dublin.

Q: Do you find yourselves having to explain what it is you’re doing?

A:  A good proportion of the audience come to participate and would already be used to the traditional singing session format, but we do get new people every month. Generally we begin by explaining a little about how the session is run: the running order of the night, respecting each singer etc.

Occasionally, we’ve been asked why people can’t just come and sing whatever they want. The answer is that, while we would never stop anybody singing, the session has a specific remit. Nobody would go to a jazz club and expect to be able sing a Seán Nós song. There’s a broad array of open mic nights in the city catering to all kinds of singers; we’re trying to fill a specific void. There are so many beautiful traditional songs; encouraging the dissemination and enjoyment of these is really our goal. If we can inspire someone new to research and learn a traditional song after attending the session, that would be great.

Q: Why did you gear this session toward younger singers?

A: The session is for singers and all listeners of any age but it is run by a collective of younger singers, which sets it apart. We all loved to sing traditional songs, but didn’t regularly get together in a room to do so. I suppose we wanted to create a fresh platform and bridge the gap between different generations of singers. Now the sessions are a completely mixed bag in terms of age. Without the support of the singers of An Goilín, the Howth singing circle, the Clé club, Malahide singing circle, and Song Central we simply wouldn’t exist but, similarly, it’s the attendance of younger singers and those outside the trad world, that makes our session different. As it is now we hope that anyone who wants to come and participate, regardless of age, feels comfortable to do so!

Q: What are you doing to attract younger singers?

A: The fact that the session is run by younger folk is in itself an attraction. A lot of the regular young singers are also musicians and have a wide network of friends interested in different kinds of music. We were very lucky to have been given the support of the Arts Council too. We were awarded a grant which has enabled us to invite singers of all ages from around the country and overseas to join us as guests. This has helped us make further connections and draw in audiences. We have also been invited to host the session as part of other events such as the Franke Harte Festival and the Drogheda Singing Gathering. These opportunities are really enjoyable for us and help keep the momentum going.

Q: Are you growing in numbers?

A: Yes. Sessions will always vary slightly, but our numbers have been growing consistently. You have to arrive on time get a seat these days! 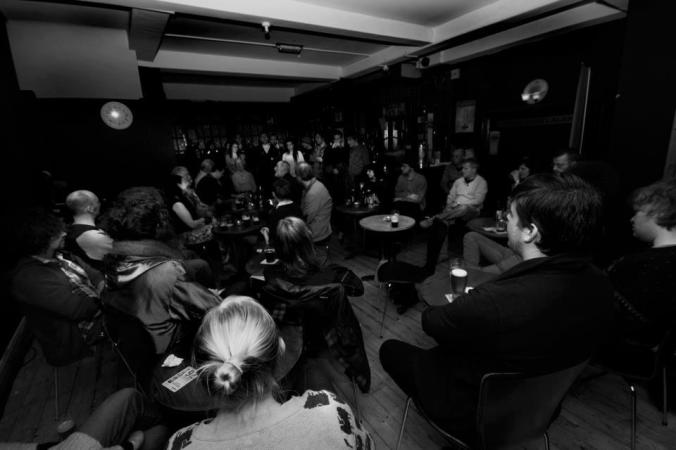 Q: Could you tell us about the founders of this group?

A: The collective comprises Ruth Clinton, Lily Power, Ian Lynch, Dara Yeats and Sinéad Lynch. We are a group of friends who all met through traditional music in one way or another. We are all singers and performers and members of three different traditional groups: Landless, Skipper’s Alley and Lynched. We each have very different traditional backgrounds and are between 23 and 33. There is a leo a wider group of young singers who have been consistently since the beginning, including Chris McCall, Ken Duffy, Daragh Casey, Daragh Lynch, Radie Peat, Brian Flanagan and John Flynn to name a few.

Q: What has been one of your favorite moments since The Night Before Larry Got Stretched began?

A: To be honest there have been far too many memorable moments to list. We often leave the session speechless at the standard of singing and the atmosphere. We feel really fortunate to be able to invite guest singers and to have the ongoing support of the traditional singing community driving us forward. Nellie Weldon, wife of the late Liam Weldon, has become something of a regular feature; we have the pleasure of escorting Mrs Weldon to her seat every month and she often sings us one of Liam’s songs. We have had the fantastic Dublin singers Fergus Russell, Luke Cheevers, Jerry O’Reilly and Niamh Parsons as well as séan nós singer Nel Ní Chroínín from Cork, Rosie Stewart from Fermanagh and Stuart Carolan from Drogheda. And the list goes on! 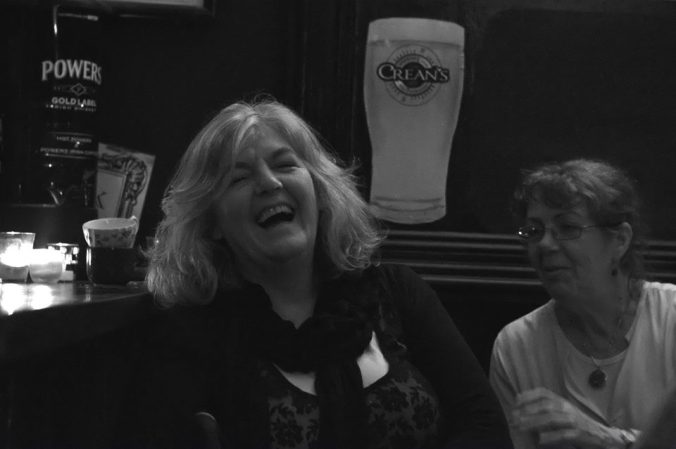 Niamh Parsons enjoys an evening at The Night Before Larry Got Stretched.

Q: What is your favorite comment about the session you’ve heard/received so far?

A: In terms of comments, it’s always great to hear praise for the session from singing stalwarts that we admire, but it’s also really nice when someone new turns up and enjoys it.

Q: Do you have plans for the future?

A: Our big plan is really just to keep the session going with the same drive and quality. We have talked about organising a singing festival across a few different venues in Dublin, to keep it fresh and lively and to appeal to a newer, wider audience. We want to both rejuvenate and uphold the tradition.

Links to some of the founders’ personal or band pages:

If you know of a circle, session, singing weekend, workshop or other regular singing event you think should be profiled in the Circles and Sessions series, just drop us a note.