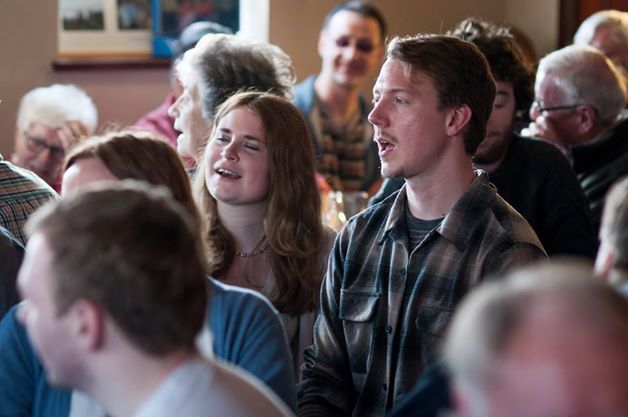 This post is a special treat. To flesh out SOTI by including the experience of more singers, I’ve begun asking singers of note to share their experience of singing with others. Brían Ó hAirt agreed to be the guinea pig for this series, and I couldn’t be more thrilled with his reflection on the 2013 and 2014 Inishowen Singing Festivals, put on by the Inishowen Traditional Singers’ Circle. I hope you enjoy, and go raibh míle maith agat, a Bhrían!  END_OF_DOCUMENT_TOKEN_TO_BE_REPLACED

For this installment of the SOTI Singer Q&As, I’m happy to introduce an audio component. I think hearing the singers in their own voices adds a great deal.  Please forgive a bit of a digital sound that can result from recording from Skype, but it’s still a fair deal better than the sound over a phone.

Brian Hart (second from left) pictured here with members of his band Bua.

In 2004, Brian Hart (Brían Ó hAirt) was the first American to win the ballad singing competition in the senior division at the All-Ireland Fleadh. Brian is a huge advocate for the Irish language, teaching the language throughout the U.S.A. and through his involvement with the Language Hunters. In fact, Brian came to Irish song through his interest in the language.  I first met Brian through his role as a teacher of Irish at the Indiana Celtic Communities’ first Celtic Culture Weekend in 2009, and I have been inspired by his love of the language, the music, and the culture ever since.

He has just completed another successful tour with the great singer from Northern Ireland, Len Graham, with whom he has been singing for some time.  The two have recorded a CD through the efforts of a kickstarter.com campaign in 2012. I’m very happy include to Brian through this series on SOTI.