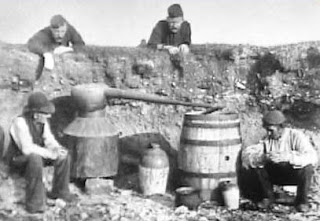 A song about the Irish form of “White Lightning” called poitín. It’s sung and played by piper Sean Folsom. According to this video:

Sean does not imbibe any alcohol, most of the time, as he is a temperate, but not completely, “Tee-Total” Bagpiper. Usually, Sean pours small amounts of any 80 proof alcohol into the bags and/ or bellows of his pipes on very hot, dry (non-humid) days to keep the reeds from losing their inherent moisture.

Below is one version of the lyrics which don’t match Sean’s completely.  This song is also known in the U.S. with some additional stanzas and goes under the various names of “Rare Old Mountain Dew,” “Mountain Dew,” and others.

1. Let grasses grow and waters flow
In a free and easy way
But give me enough of the rare old stuff
That’s made near Galway Bay
And policemen all from Donegal,
Sligo and Leitrim too
We’ll give them the slip and we’ll take a sip
Of the real old mountain dew.

2. There’s a neat little still at the foot of the hill
Where the smoke curls up to the sky
By a whiff of the smell you can plainly tell
That there’s poteen boys close by.
For it fills the air with a perfume rare
And betwixt both me and you
As home we roll, we can drink a bowl
Or a bucketful of mountain dew.